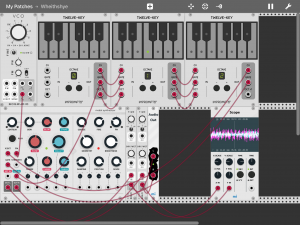 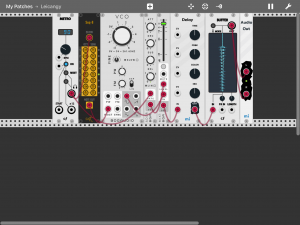 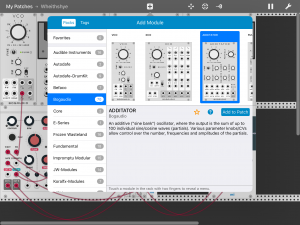 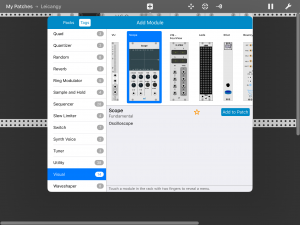 SoundGrid is back on the App Store

SoundGrid was one of the first matrix sequencers for iOS, released back in 2009. I haven't updated it in a while (well, for many years, that is). Several times I was going to publish an update but never had time because doing it properly would require not just updating for the new devices and screen sizes, but also supporting inter-app audio, MIDI and other stuff that didn't exist back then.

Recently looking again at all the tracks people shared within the app and published on SoundCloud, I thought it would be a shame if all that go to waste. So I decided to make SoundGrid available on the AppStore again at least in its original form without any new features if I don't have time for them. And so I did.

Also here's an old playlist with some of the tracks composed in SoundGrid, more can be found using this search.

A screenshot to demonstrate the map rendering improvements I mentioned in the last post. 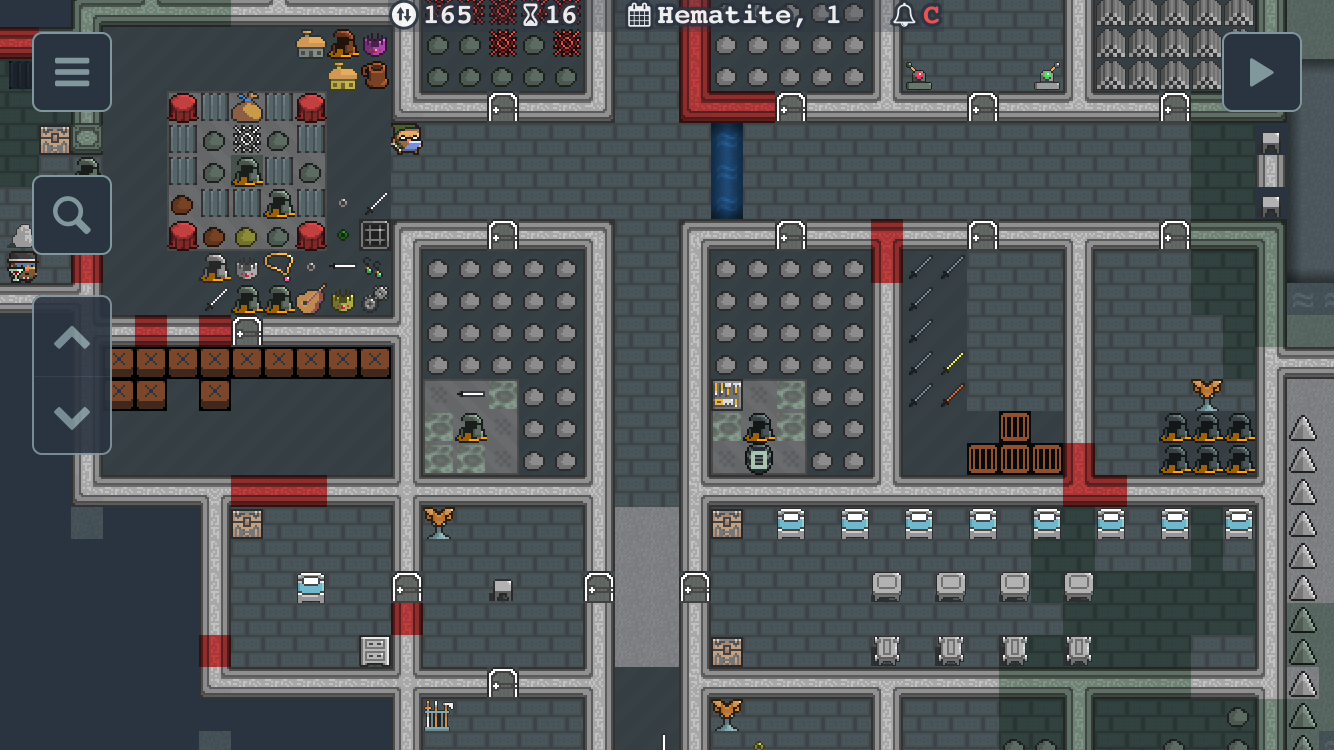 Application version 2.12 and other news

Dwarf Fortress Remote for iOS version 2.12 has been released. This update fixes a crash when trying to change settings of a siege engine building. Also you can now configure how many announcements are visible at the bottom of the screen at once and how fast they scroll. And lastly, it fixes a problem on iPads where the game is not paused when you navigate away from the map screen to other screens (this could have caused random issues because of the game state changing when it's not expected to).

Now on to the other news. As everyone probably heard by now, Dwarf Fortress is coming to Steam with enhanced graphics and professionally made tileset. This means big changes both for TWBT and for DF Remote. Hopefully the game will have all of the TWBT features out of the box so the latter won't be required anymore, which is good as I lately didn't have enough time to work on in anyway.

For DF Remote it's a bit more complicated. Obviously, it will need to be updated for all the internal graphics-related changes in DF code. But also all the same graphics features will have to be added to DF Remote application so that it does not look any worse than what people get on desktop (which so far was a simple thing to do). I won't be able to use the official tileset as it will only be in and for the paid Steam/itch.io version, and I don't expect there to be as many community tilesets as there are now if the official one will be good enough. So a new tileset will have to be created specifically for DF Remote.

It's still a long way until it all happens, but already I feel it's time to improve both graphics in the application and its user interface.

First of all, DF Remote application will get most of the remaining TWBT features it doesn't yet have. This includes "multilayered" rendering where item, building and unit tiles have transparent background and rendered on top of the floor tiles instead of replacing them. And also the ability for items and buildings to have certain parts of their tiles not affected by their material colour (in other words, pillows always stay white and weapons on weapon racks don't get wooden colour). I decided not to implement full support for TWBT overrides but the will be a lot of fixes and additions to the tileset (meaning the default Spacefox tileset).

As for the user interface, I started with improving usability in iPad, but then implemented what is going to be the main change - a fully configurable map screen UI. All of the buttons and menus that appear on the map screen will be described in an XML file, so that they can be repositioned, removed, or new buttons and menus added. If you ever wanted to move stuff around or to have extra buttons to quickly open certain screens, switch to certain designation mode or place certain buildings - you will be able to add them.

Another UI addition is "shortcuts" - buttons for frequently used building actions that appear next to OK/Cancel buttons when a building is selected. For example, to lock/unlock a door, pull a lever or to resize a room without opening a full building information screen.

Last but not least, I do remember that the world information/missions screen is still unavailable, and I am working on it too.

Important information about upgrading subscribers to 0.44.12

UPDATE: Almost all (see below) subscribers have now been upgraded to DF 0.44.12.

I'm about to start upgrading subscribers to Dwarf Fortress 0.44.12 now. Sorry it took so long, I have discovered an issue affecting this upgrade and further version update processes, and had to find a solution first.

In order to perform the upgrade, you game will be saved and server terminated. The next time you connect, a server with DF version 0.44.12 will be started and you'll need to load your game manually. This will be done even for new subscribers already having version 0.44.12 to ensure everyone's servers are running the same code.

I have made backups of all saves and running games before the upgrade, please let me know as soon as possible if you notice any problems after connecting to your upgraded server. Also, some games are in a state in which it's not possible to save them (most comonly world generation and embark preparations) - they will upgraded once they can be saved.

We've just released a major app and server update, and added support for Dwarf Fortress 0.44.12. Subscription users will be updated to 0.44.12 over the next couple days. I hope everything goes smoothly for them and for everyone else. If you have any issues, please let me know.

The new world map/missions screen added in 0.44.12 is not available in the app yet, it will be added in one of the usual app updates soon. 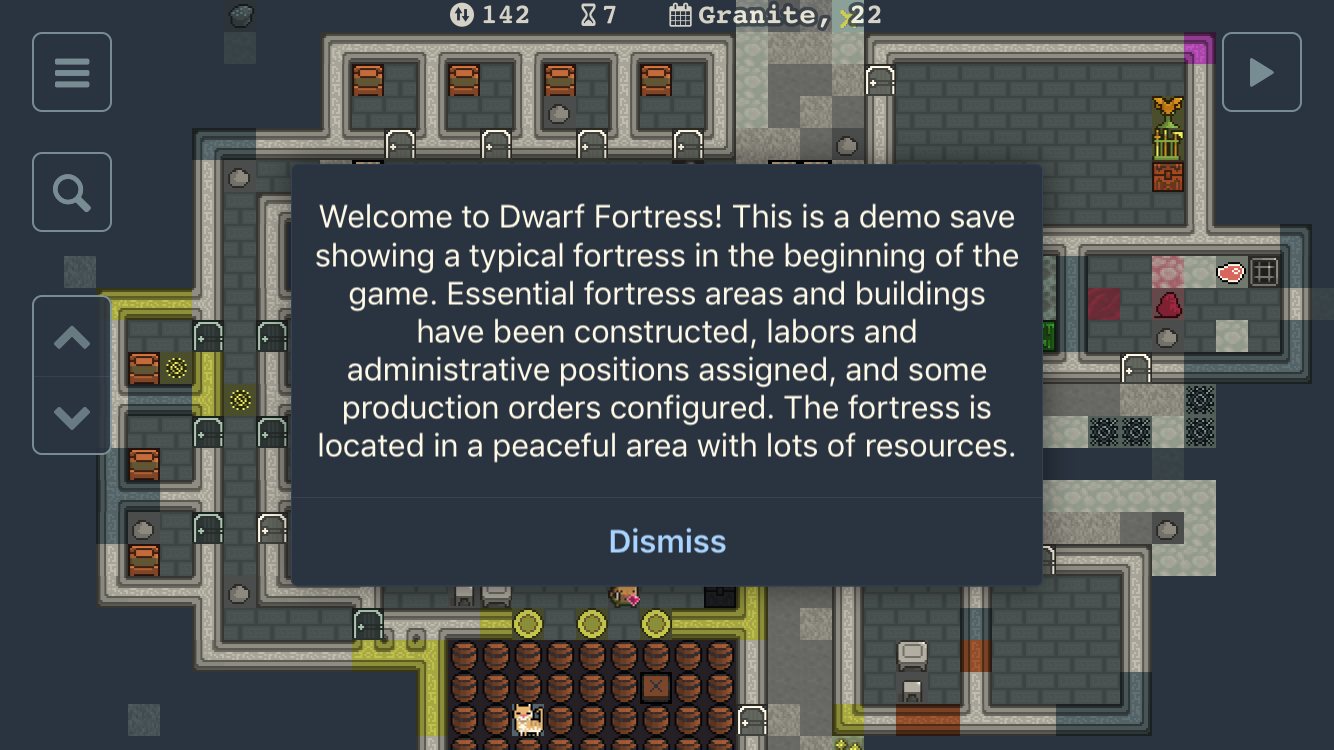 New server subscription players will now find a save in demo folder showing a typical small fortress in early game. It has essential areas and buildings constructed, labours and administrators assigned, and some production orders configured. Also, points added for many important locations around the fortress with some comments.

This is intended to show what Dwarf Fortress is like to new players. Still, studying a proper tutorial will probably be required to play though.

The same can also be downloaded from here.

Just a reminder - if you enjoy playing Dwarf Fortress, whether via DF Remote or on desktop, consider supporting its authors, Tarn and Zach Adams. Dwarf Fortress is free and redistributable, and they rely solely on donations for all these years. 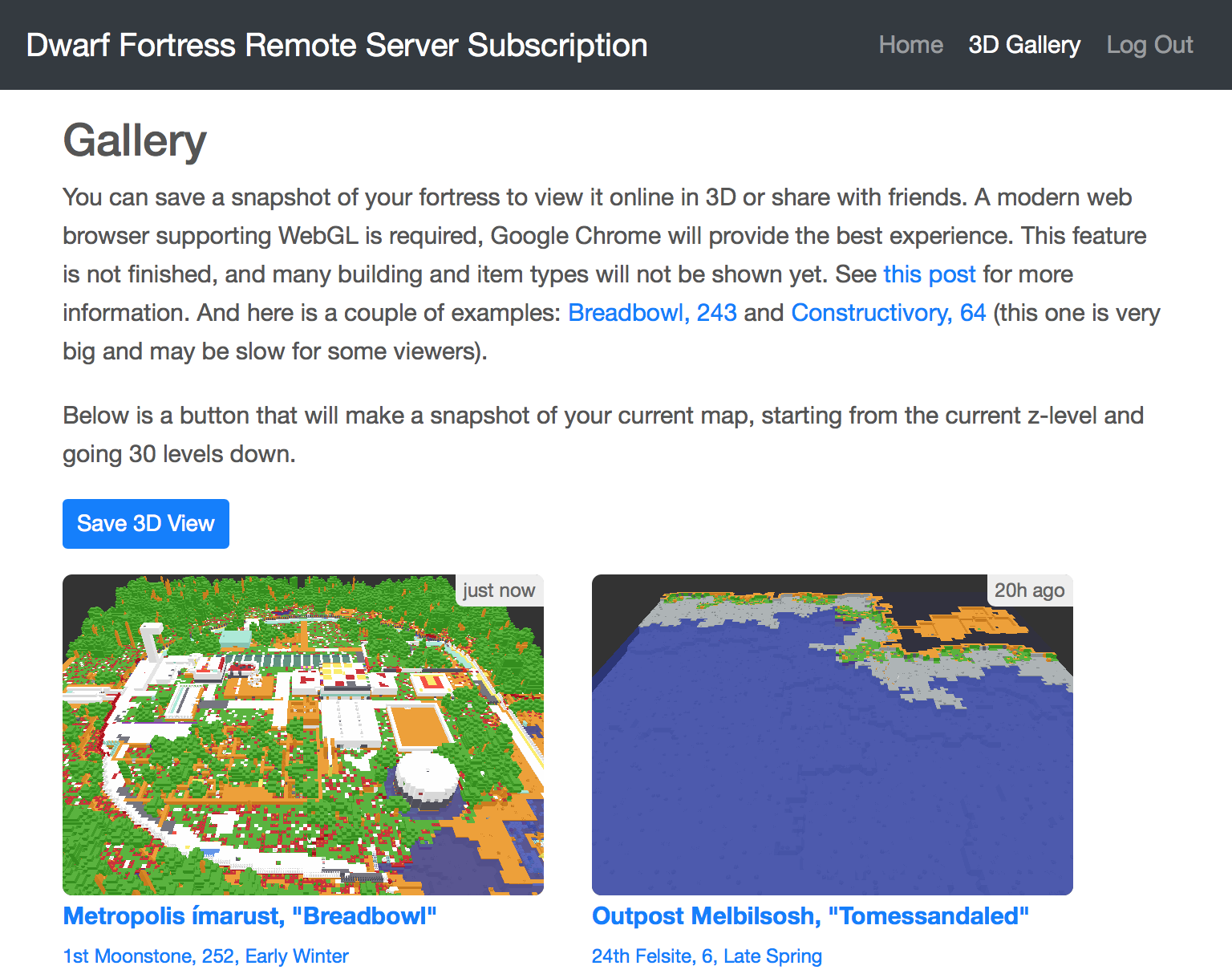 This is the same 3D viewer I made long time ago and it's still not quite finished, but it's good enough to look at your fortress in 3D and share it with friends. The original viewer is still available for everyone, but now Server Subscription users have a gallery page with all their map snapshots, and also a button in the iOS app to save a snapshot. Links to view individual maps are public and thus can be shared with anyone.

The gallery has actually been available for some time now, so for those who already knew about it, the latest changes are the addition of previews and Delete button. 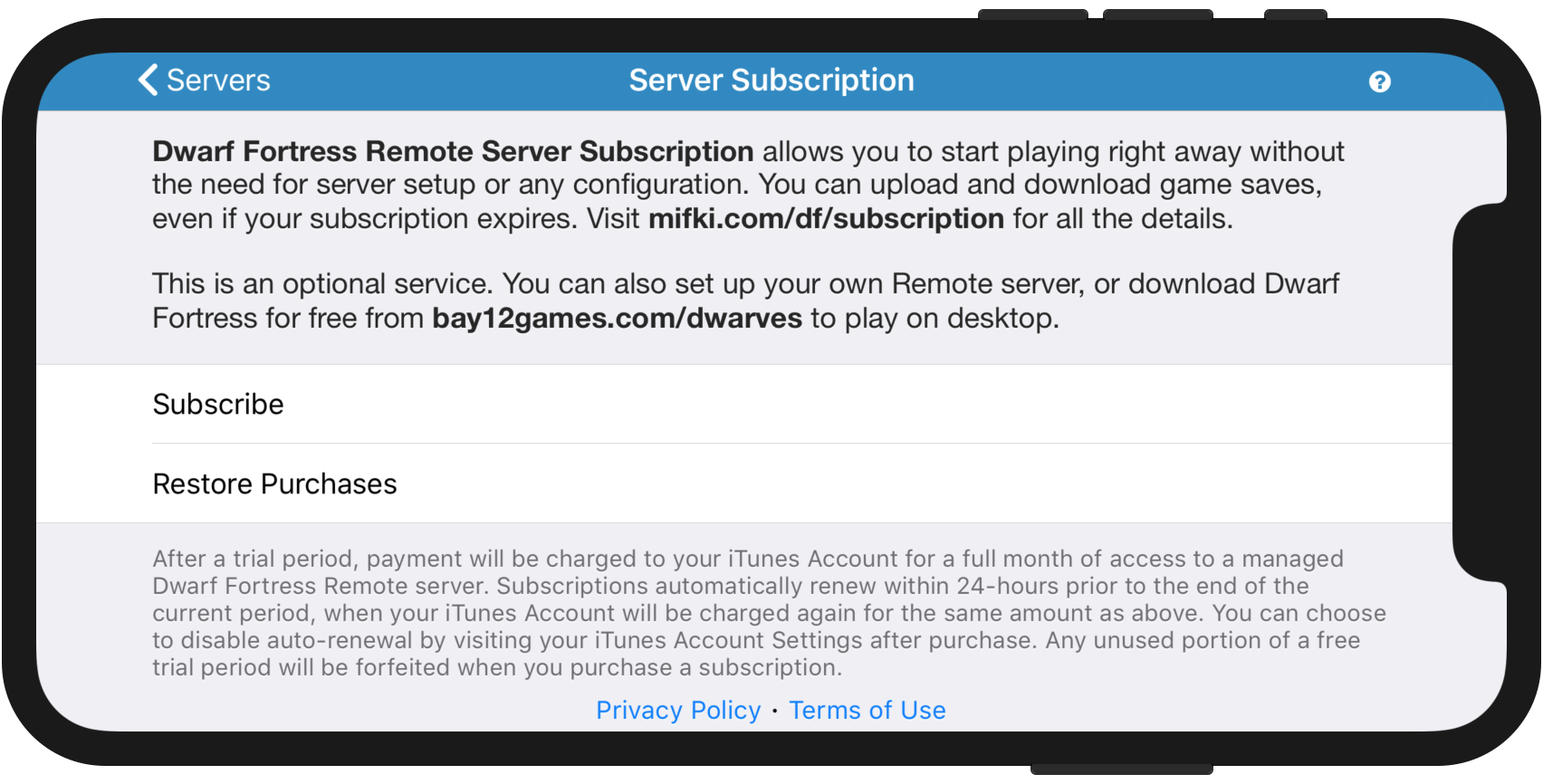 Server Subscription has now been available for several days already, I've fixed some glitches, thanks to the brave first users, so it's time for a proper announcement.

Server Subscription provides, well, a cloud server with Dwarf Fortress + DF Remote running on it. The price currently is 4.99 USD or a corresponding amount in other regions. A free 3-day trial is available.

Subscription is an optional service that provides a pre-configured server with DF Remote. Remote server plugin will always be free for installation on your own computer. Dwarf Fortress is a game by Bay12Games available for download free of charge. Support them!