miRack for macOS that's available from the Mac App Store already includes an AUv3 plugin. Unfortunately, not many DAWs support loading v3 audio units yet (Logic Pro, Garage Band, Reaper, LUNA and some others do).

miRack Legacy AU can be used as an instrument or an effect, supports up to 16 input/output channels and all the features of miRack and AUv3 plugin, including presets, MIDI, parameter recording and automation, and excellent performance allowing you to use many instances of miRack in your project.

That's all, you should see miRack Legacy and miRack FX Legacy audio units (and their 16-channel variants) in your favourite DAW. As this is the first release, if anything is wrong, please let me know.

And of course, if you did not know, miRack is available on iOS devices, too.

miRack 3.50 is out with multi-channel audio, MIDI out and new modules 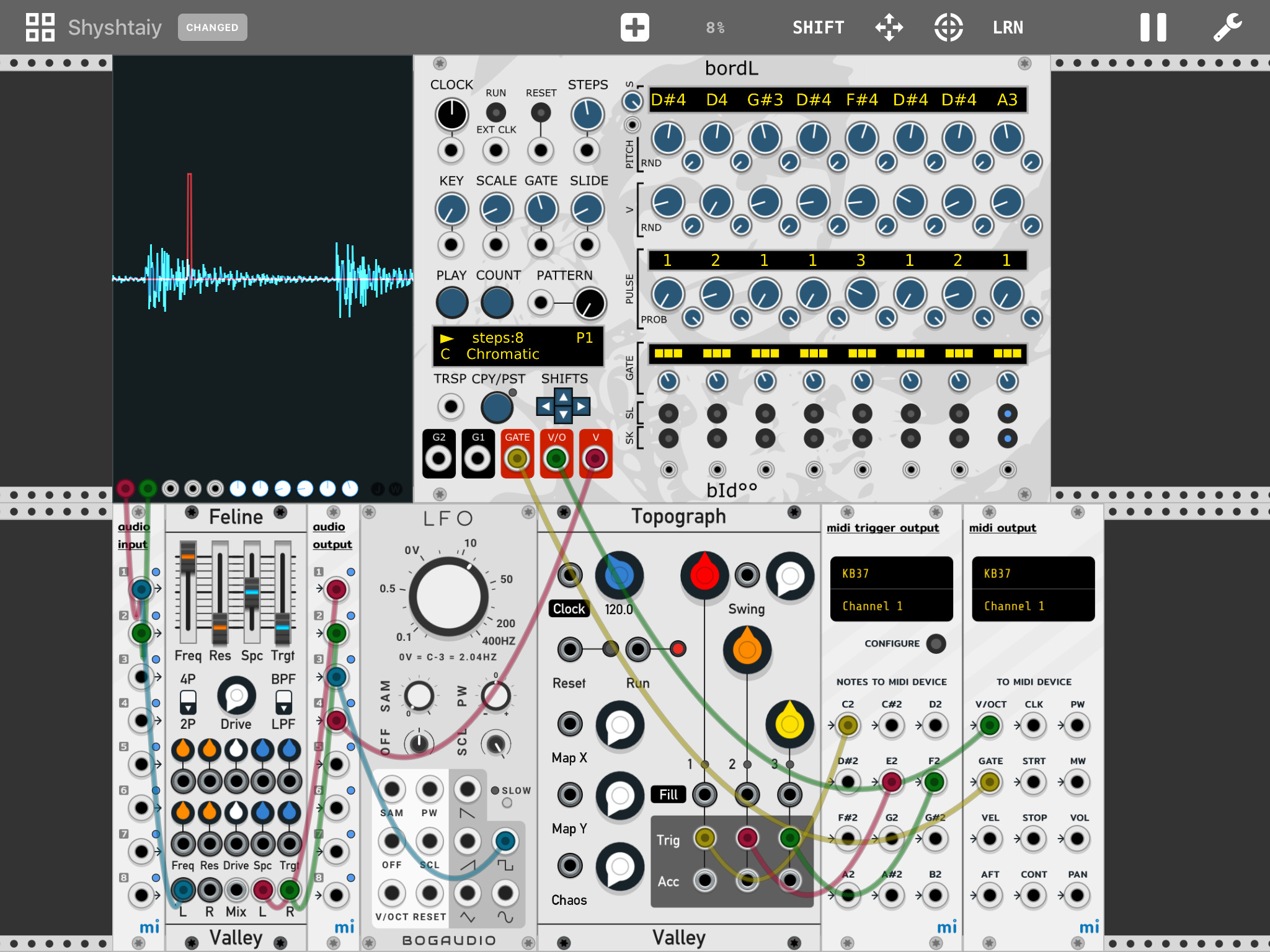 miRack now supports up to 16 input/output channels in standalone, AUv3 instrument and AUv3 effect modes, both on iOS and macOS. There are new 8- and 16-channel audio IO modules, and number of channels of audio modules in existing patches can be changed from their module menus.

There are 3 new MIDI output modules, and new versions of MIDI CC and Trigger input modules.

MIDI out works via CoreMIDI, Audiobus and AUv3. For AUv3, a dedicated MIDI Processor AU type is also available.

Added bId°° (Bidoo) module pack. It's a great collection of modules with weird names by Sébastien Bouffier, including several powerful sequencers - perfect for use with the new MIDI out functionality.

Added an option to Host Sync module menu to change clock output rate (instead of a fixed BEAT output). This can also be used for connection to Clocked module for more reliable timing. Set CLOCK output to Beat / 4 or Beat / 8, connect to BPM input of Clocked, and set Clocked mode to P4 or P8 accordingly.

For MIDI keyboards that do not support per-note aftertouch but support channel pressure, it will be used for AFT output of MIDI module.

Added SHIFT toolbar button to access secondary function of certain module controls. It's used in number of new Bidoo modules, in Squinky Labs mixer to solo multiple channels, and other places in the future.

Improved rendering of lights and some module controls.

Added keyboard shortcuts to macOS version to zoom when no trackpad is present.

I implemented multitheading for miRack audio engine back in 2018 when it was a project targeting single-board computers because with slower CPUs it's essentially a requirement to be able to run any decently-sized patches. The implementation (available here and is used in miRack app with minor modifications) is based on idea of having arrays for module input and output values, and a lock-free concurrent work queue implementation by Cameron Desrochers.

For each rendering cycle, say 512 samples (steps), all rack modules are pushed into to a work queue, also with start and end steps to process (so initially that is 1 to 512), then worker threads are woken up. The worker threads dequeue modules from the work queue and check that values for the step being processed are present for all module inputs (for disconnected inputs this is always true). If all values are available, the module is processed and output values are saved straight in input arrays of modules connected to each output for the next step number. The process continues until the end step is reached or until any of the input values are not available, in which case the module is pushed back into the work queue (updating the start step if needed) and another module is pulled from the work queue. Once there is no more modules in the work queue, the workers pause, and the rendering cycle completes. This implementation ensures that workers don't wait unless they have to.

Until recently I never looked at the multithreading implementation that later appeared in VCV Rack (available here), but wanted to run some benchmarks at some point.

During normal opearation, VCV Rack implementation uses spinlocks only. For each step in a rendering cycle, workers process only that single step for each module. Once there are no more modules for a worker to pick up, it will spinwait until all workers have finished, then values are transferred from outputs to connected inputs, and the workers are woken up to process the next single step. This implementation causes the workers to wait a lot instead of possibly processing next steps for some modules.

Now to the benchmark. I used the current miRack code and the latest VCV Rack code. All graphics rendering was disabled, as well as audio output. For VCV Rack, updating port lights was also disabled - it involves a lot of computations that substantially affect the results while not being related to audio processing.

The audio engines were told to process 1024 samples (steps) as fast as they can, and it was repeated 1000 times for a single thread then for 2, 3, and 4 worker threads. The tests were performed on a CPU with 4 physical cores. The following patches (by VCV Rack Ideas were used): 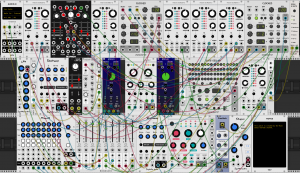 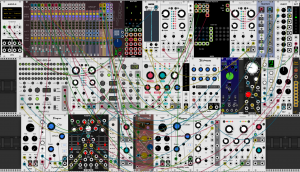 Also I should note that initially it was about comparing multithreaded speed increase, not absolute values (at least because miRack and VCV Rack use different versions of some of the patch modules), but absolute values turned out to be quite interesting as well. As I mentioned above, port lights update code adds about another second to VCV Rack results. 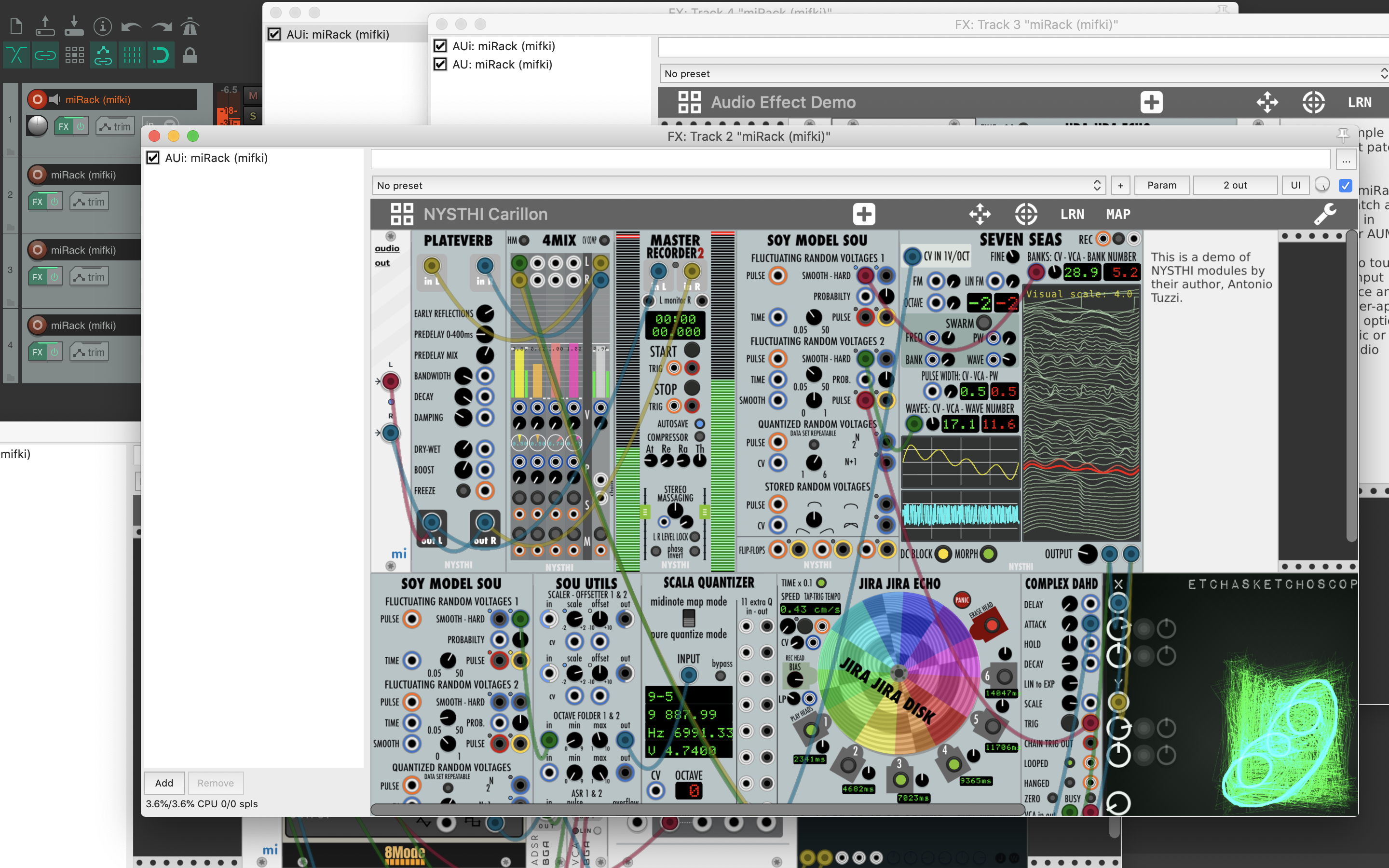 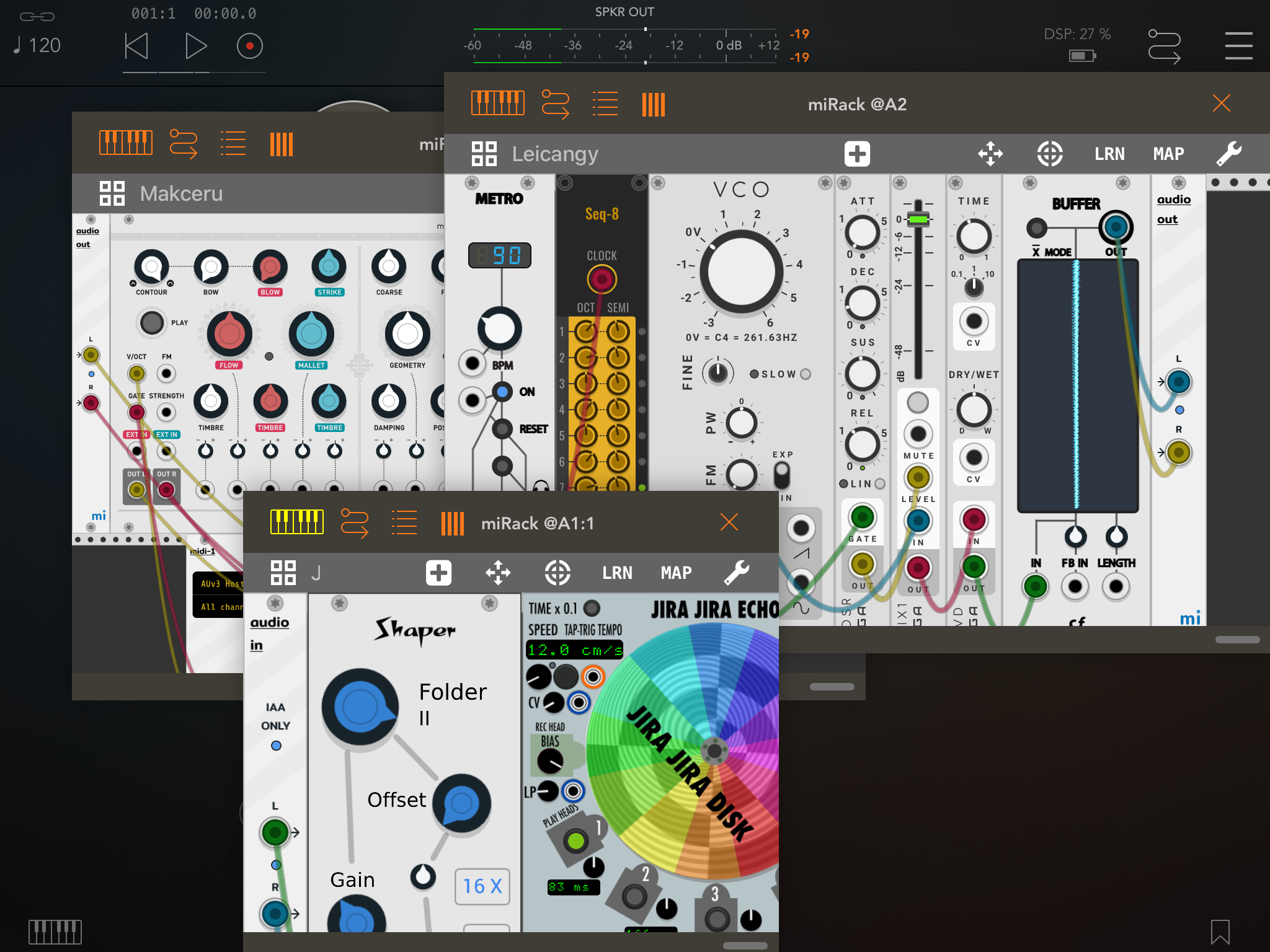 The wait is over, miRack AUv3 plugin is now available in your favourite host app or DAW. Can be used as an instrument or effect, and supports parameter automation. Enjoy!

miRack is now available on macOS 10.15 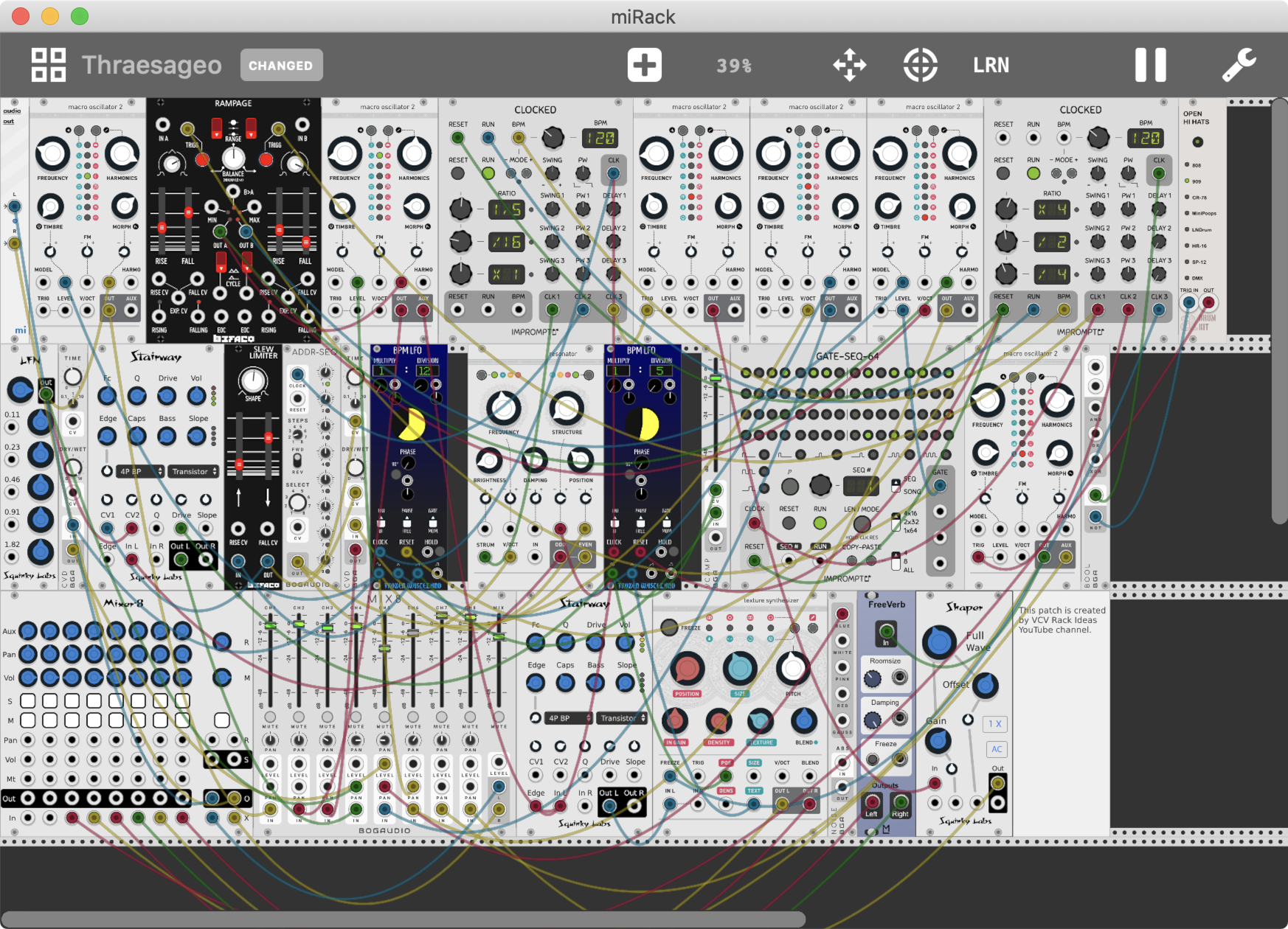 Many users asked for a way to work on their miRack projects on desktop, too. Initially I was planning to support exporting to and opening patches made in VCV Rack, but that does not seem to be achievable at the moment. Therefore, miRack is now also available as a free macOS app.

It contains all the same modules, supports Core MIDI and Ableton Link, and can open patches directly from miRack iCloud folder.

As it is essentially the iOS miRack app built for desktop, it requires macOS 10.15 (Catalina) or later to work.

Another update while finishing the last bits for the upcoming AUv3 release.

It's been a while since the last miRack update, that's because I was working on several big features - AUv3, multitouch, variable sample rate support, and also Metal rendering (this one is almost not noticeable for users users but is quite important going forward).

AUv3 is already being tested by the beta testers and is looking good, with last bits and pieces left to be done. In the meanwhile, here's an update with everything else. There will be another one with some more fixes, and then AUv3.

It's been quiet recently with no app updates for quite some time (by miRack standards). This is because I need to implement a number of internal and UI changes required for the upcoming features. This required some research and experimentation to make sure everything I planned is possible and won't require significant API changes in the future, specifically so that I can release a stable SDK for plugin developers.

Everything went well, and although there's still stuff left to do, you can expect new modules and features soon - some have been discussed and promised before, and some I haven't mentioned yet.