3D view is one if the "bigger" features (alongside sound effects, command bar/voice control, unattended operation and ████) that I ultimately want to add to Dwarf Fortress Remote.

Last year I've already experimented with 3D rendering of Dwarf Fortress maps ([1], [2], [3]) but then took a long break because I wasn't satisfied either with the performance or something else, don't remember. This month I started again from scratch and did things right, so there's more chance Remote will get this feature.

However there was also another part to that project - to make an online 3D map viewer/map archive, sort of a 3D version of DFMA. This is because mobile and browser/WebGL environments are somewhat similar - both are OpenGL ES-based and have constrained resources. Basically I can take iOS rendering code (shaders, mesh building), make just minor changes to convert C to Javascript, and then it works in browser.

You can export your map by copying/pasting a command from the page to DFHack console, or just upload a save if not using DFHack. In either case you'll get a link that anyone can use to view your fort in 3D. I've exported several community games as an example: Constructivory, The City of Air, Breadbowl.

This is a work in progress, some models are missing (namely most of the workshops and furnaces) but otherwise I'm quite happy with it. Obviously a modern browser with WebGL support is required, and right now it won't work on mobile devices becuase I need to support touch controls.

In the latest version of Dwarf Fortress Remote app, I added some colours to group designations related to mining, nature-related, cancel/removal, and submenus. Initially I was going to keeps items in all menus ordered exactly as they're on desktop however now I really like the new look, so I will probably reorder the building menu slightly as well at some point.

Please report all issues you experience with Dwarf Fortress Remote

Recently I released several new Remote server plugin versions, and one iOS app update. They fix number of gameplay and stability issues (including a plugin crash when it's active for a very long time), and also improve error reporting so I can fix further problems faster.

However I ask users to report any issues they stumble upon using the built-in support/feedback functionality. Due to the complexity of the game, there's a lot of in-game situations that I've never seen when playing or testing myself and which may also be impossible to recreate at will.

So if you open any screen, and the data can not be loaded or something doesn't work, please report this (I basically will need to know what was happening in the game and what you were doing in the UI), and with enough information I will likely be able to fix any such issue within a day or so, and make DF Remote a better experience for everyone.

Sadly, due to an error in build scripts, Dwarf Fortress Remote packages for 0.43.05 did not include an updater plugin until recently. Users who downloaded them will see an error when trying to update Remote server from the iOS app.

What to do: please download this package and unpack remote-updater plugin file for your OS into hack/plugins folder inside your DF installation folder.

Sorry for the inconvenience.

Dwarf Fortress Remote now supports Dwarf Fortress / DFHack version 0.43.05-r1 (64bit version only). This is the first 64bit version of Dwarf Fortress, and it can support bigger worlds without hitting a memory limit, and purportedly a little bit faster in some cases (as well as having a few bugs fixed in the game itself, as usual).

The new version is compatible with saves from older versions so feel free to update (however you need to have a 64bit OS to run this and future versions). The easiest way to update is just to install a new package from mifki.com/df/setup, and copy saves located in data/saves folder. You can then re-add your server to the application, or copy data/init/remote.txt file to preserve settings like published name and password.

I've also added an article how to update to a newer version of Dwarf Fortress if you have Remote server running in a Docker container, for example, on a cloud server.

The first stable DFHack version for Dwarf Fortress 0.43.05 has now been released (DFHack 0.43.05-r1), so expect Dwarf Fortress Remote to get support for this version soon.

The major change in Dwarf Fortress 0.43.05 is that it is now a 64bit application. 32bit versions are available too, however only 64bit version will be supported by DF Remote. Installation on Linux will now be simpler, as there's no need to install 32bit libraries for DF to work anymore.

While working on showing performance skills on unit skills screen, I thought it would be useful to be able to access descriptions of the listed poetic/musical forms and dances right from that screen.

Currently, even in the original game on desktop, it's not possible to view their descriptions other than from the unit/job list screens when someone if performing them. So while figuring out how to get this information from the game to show in Remote app, I decided to create a script to be able to view it on desktop as well.

Download link is in this forum thread for now. As for the app, I will update the screen above to open form/dance description when touched, and also will add another screen to see a list and descriptions of all instruments, forms, dances, and possibly other procedurally generated content.

The next version of Dwarf Fortress Remote will greatly simplify server configuration and adding it in the app. Just install, type one command and scan the code to configure connection. 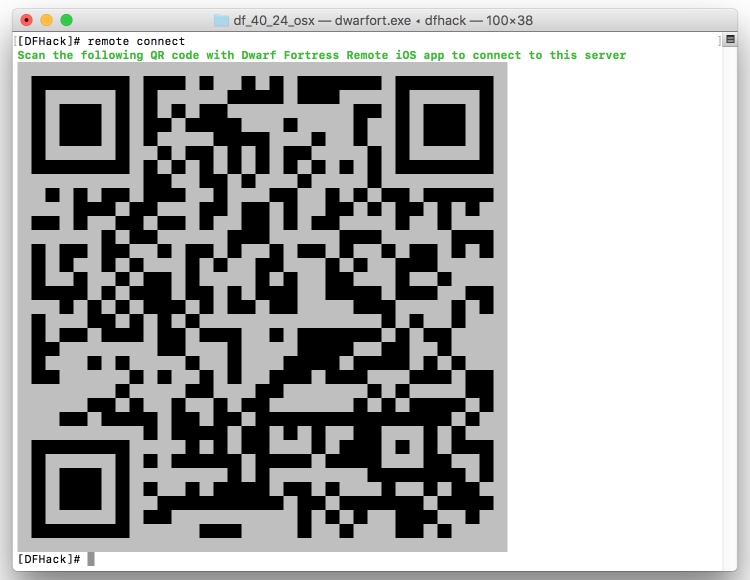 The following issues have been fixed in version 1.43 of Dwarf Fortress Remote app:

After installing Docker package docker.io from official Ubuntu repo and then removing it (to install the latest version from Docker's own repo instead), I found that my server could not resolve hostnames anymore (back then I didn't know yet it was caused by Docker though). After reboot, /etc/resolv.conf was blank, although files in /etc/network/interfaces.d/* files were intact and contained the correct DNS servers.

/etc/resolv.conf nowadays is actually a symlink to a file managed by resolvconf, which is being passed DNS server list by ifup on reboot.

What happened is, docker.io package depends on ubuntu-fan package which installs /etc/network/if-up.d/ubuntu-fan script to be called by ifup (and other scripts for ifdown, etc.). When I removed Docker and then ran apt autoremove, it removed ubuntu-fan package, but left the scripts. On next reboot, ifup tried to execute them, but the actual fanctl executable was no longer there, ifup was half-failing and not calling resolvconf, although the interface was up (I'm not sure why, as /etc/network/if-up.d/000resolvconf should be called first and not affected by later scripts).

The solution is to run apt-get purge ubuntu-fan which will delete residual configuration files, and restart the server.