miRack is now available on iPhone

IMPORTANT: If you've already purchased miRack on iPad, you will not be charged twice even though it may look as a separate purchase when viewing the app in the App Store on iPhone.

Surely creating complex patches is better done in miRack running on a big iPad Pro screen, and at first an iPhone version wasn't planned. However the recent addition of audio input support made it possible to use miRack to build modular audio effects running in the background. And finally the MIDI learn function added in the latest update allows to control a patch using external hardware or other apps, so that in many situations, the screen size is not important anymore. And of course some may want to use iPhone for patching for other reasons.

Therefore I'm happy to announce that miRack version 2.00 is available on the App Store and is a universal app now working on all devices running iOS 12 or later.

One other change in this update is a new 1-finger pan mode (enabled in the Tools menu and enabled by default on iPhone). It allows to pan the rack with just one finger which is more convenient when holding an iPhone.

Below I collected some links to tutorial videos that should help beginners to get started with miRack and modular synthesizers in general. This is just the first batch, the post will be updated.

Very good quality beginner-friendly tutorials starting with miRack operation and basics of modular synthesis and moving to advanced topics. New videos added regularly, so the list here may be incomplete.

Many of these are not tutorials, but the patches are shown in videos and are simple enough to give an idea how to make generative music and/or use certain modules. See the playlist for more videos as only the ones with descriptive titles are included below.

Omri specialises in creating VCV Rack tutorials (as well as hardware modular and music creation), so some of the modules shown in videos may not be available in miRack, but definitely see his channel for great modular synethesis content. Below are some of the tutorials explaining individual modules that can easily be followed in miRack.

This build introduces audio input support, allowing to build modular audio effects and use miRack as an effect node in Audiobus, AUM and other IAA hosts. Also the module browser is now fullscreen with vertical scrolling and better performance for more comfortable navigation in the growing collection of modules.

130+ new modules (most notably there are sampler and recorder modules now), user interface, usability, and MIDI improvements in this update.

A collection of 100+ modules. Advanced samplers and recorders, oscillators, effects, utilities and a scope - modules for every need, many of which have visual design you won't find anywhere else.

Unique modules loosely inspired by astronomic events and physical theories. "The goal is just to see how science can inspire us to create new music."

13 new MSM modules - many of them add interesting new outputs, parameters and modes to standard modules.

cf PLAY and PLAYER samplers - these are simple modules when you don't need advanced functionality of NYSTHI samplers.

Notes (found in the end of Basics list) - add short notes to a patch. It's resizable so can also be used as a spacer between other modules.

As always, thanks to all module developers!

miRack has been added to Patchstorage! Patchstorage is a place to share patches, presets and projects for audio and video software and hardware. Please see below for some notes regarding uploading and downloading miRack patches to and from Patchstorage. 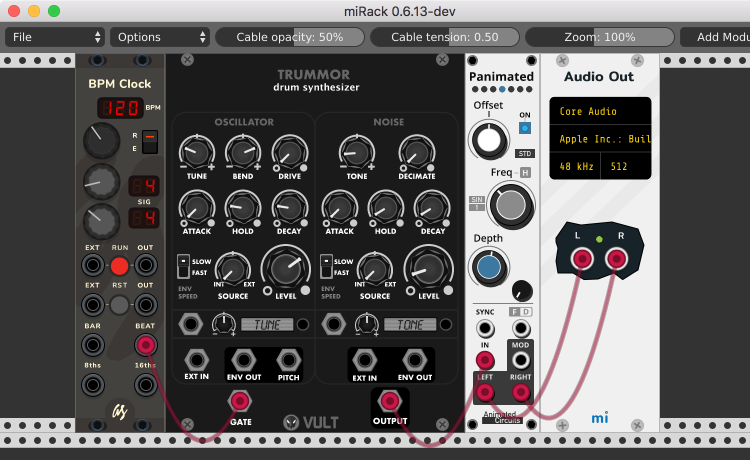 Great news! I've managed to implement loading of closed-source VCVRack plugins into miRack. This means it now makes sense to build packages for desktop operating systems. And soon you will be able to enjoy all the benefits of miRack, including lower CPU usage, more responsive UI and multithreaded processing - and still use all the same plugins you have, including commercial ones you purchased.

Of course this does not affect miRack running on ARM boards - only open-source plugins can be used in that case because they need to be compiled for ARM in first place.