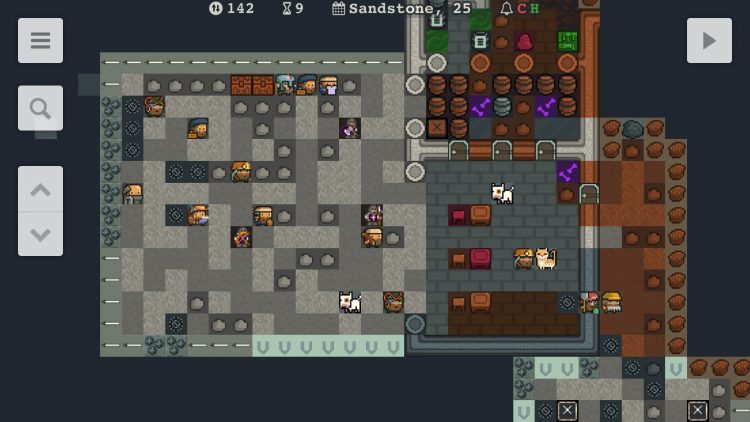 I’m happy to announce that Dwarf Fortress Remote 1.30 is available on the App Store. Main new feature of this version is support for creature graphics. Default Spacefox tileset and tileset packages available from mifki.com/df/extras have been updated to include matching creature graphics sets.

Also in this release:

Reconnection to games will now be faster, however initial connection may be slower due to creature graphics processing.

I'm happy to announce that Dwarf Fortress Remote 1.20 is available on the App Store. This release brings support for DF version 0.43.03, almost the latest game release, and contains several other improvements.

What's new in the game

Releases 0.42 and 0.43 greatly change the game. You can now designate taverns, libraries and temples, and set tavern keepers, scholars and other occupations. Visitors, including other races, will come to your fortress to work in this locations or join your military, petition for residency and citizenship. Dwarves and visitors will spend time drinking, dancing, playing music, reading books, praying and discussing various matters. Children will play with toys. Art forms and musical instruments are randomly generated, latter requiring to be assembled from several parts.

Another set or changes is related to workshop jobs and manager orders. It is now possible to set certain job details like material, size, type of decoration and image. Manager orders can target specific workshops, start conditions and repeat frequency can be set (although not all of this is currently supported in Remote, see below).

You can also see the original Bay 12 release announcements for 0.42 and 0.43 for full list of changes.

I've decided to release the new version now, even though some of the new game features are not supported. This will allow me to work on other great things, like sound and creature graphics, while also implementing the remaining new game features in the next application updates.

Saves from 0.40 are compatible with 0.43. You can follow the new simplified setup instructions to configure a new server, and continue playing your games with new features. However some of the new stuff may not be available until you create a new world.

If you have installed any of the tilesets, you will need to download them again to ensure correct rendering in version 0.43.

I will also post upgrade instructions for Docker users shortly. (EDIT: There are available here)

And finally, number of bug fixes

Consider supporting Bay 12 Game if you like Dwarf Fortress.

I'm happy to announce that Dwarf Fortress Remote 1.15 is available on the App Store. This release introduces multilevel rendering and contains a lot of other user interface and usability improvements. Below is a lengthy detailed list of changes.

Multilevel Rendering
This feature is well known to users of TWBT plugin on desktop, and now it’s available on mobile. It allows to see not just the current z-level, but also everything below. Only the top X levels are refreshed though, where X is configurable and is set to 3 levels by default. You can tweak fog and shadow parameters if required (darker tilesets may require more dense fog and shadows to distinguish between z-levels easily). Fast building placement mode
When you need to place a lot of buildings like beds, doors or coffins, where you do not care which items will be used, you can do it much faster now. Just long press the green OK button when placing a building, and the closest item(s) will be automatically selected, without showing the item selection screen. Fast linking mode
The same when linking buildings to a lever or trap - long press OK button, and the first two mechanisms will be automatically selected to be used for the link. New clean style for the top status bar and for announcements at the bottom of the screen. Two announcements are now shown at a time, allowing to see more of them in time in a busy fortress.
Selection size is now shown when designating, creating zones and stockpiles Long press z-level up/down buttons to show list of Points - this allows to quickly zoom to various parts of the fortress When adding jobs in a workshop, swipe to add a job and set it repeat When viewing a cage, swipe a contained animals to release them without loading the full Assign Animals screen On the announcements and reports screens, “today”, “yesterday” and “X days ago” are now shown alongside the dates Clutter status and number of contained items are now shown when viewing a workshop Swipe a server in the server list to clear caches and connect - useful if you experience map corruption issues Changelog is shown in the bottom of the server list screen to keep you informed about fixes and additions being made to the server plugin and in-app help Zone information view can now be opened by pressing OK button when a zone is selected. Also, zone status is shown in the information bar. Fixed orientation of horizontal axle and water wheel shown incorrectly when placing these buildings Fixed an issue with loading noble view after leaving a position vacant Close button is removed from trading screens to prevent accidental closing and losing status of all the items marked for trade Support for iOS 8.0 - iOS 8.2
#DF Remote #Dwarf Fortress #iOS #Release Notes Tweet
·

February 20, 2016
Submitted an update for Dwarf Fortress Remote to App Store. It contains improvements to Status/Animals screen (it now shows vermin), ability to assign work animals to units. Spatters are now listed on the unit inventory (now Inventory & Spatters) screen, and some other bugs are fixed. I’ve got a lot of useful feedback recently from several players. First, right now I’m working on making all levels of stockpile settings available in the app. Then will add C/H/S notifications for unread combat/hunting/sparring reports, option to show number idle dwarves, maybe also current date and happiness. All this will likely lead to main view UI changes because I was also going to provide quicker access to all query/look modes other than cycling through them with one button.
#DF Remote #Dwarf Fortress #iOS #Release Notes Tweet
·

October 19, 2010
SoundGrid 3.2 has been released. Not so many changes in this new version: SoundGrid on the AppStore
#Release Notes #SoundGrid Tweet
·

September 23, 2009
It’s been a long time since last version and now the wait is over. We have many great new features in 2.0: Redesigned UI and visual effects
To keep UI simple, elegant and attractive for novice users. If you have difficulties placing notes on the grid now you can enable assistance lines to make life easier. Song Mode
Few people use all eight available patterns because it may be hard to switch them while playing. In Song Mode filled patterns will be automatically activated one after another enabling you to create longer compositions easily. Also now you can touch pattern button twice to switch pattern for all layers at once; or to switch pattern and start from its beginning in song mode. Switchable musical scales
There are only 16 rows (notes) on the grid and much more keys on piano keyboard. And now you can select set of tones you want to be available on the grid. Recording
Now you can record audio files while playing. Then either easily upload tracks directly to SoundCloud or send by email as is or as ringtone More and more Sound Banks
Additional sound banks now installable from external servers. Either my official server or your own. Ratings for shared grids
Many new grids become shared everyday. Now you can rate them and best ones will deservedly be always on top when sorting by rating. New shared grids since last update now marked too. Other fixes and improvements
Many bugs were fixed and many things made better. One of them is improved (means reduced) latency and UI reaction. SoundGrid 2.0 on the App Store
#Release Notes #SoundGrid Tweet
·